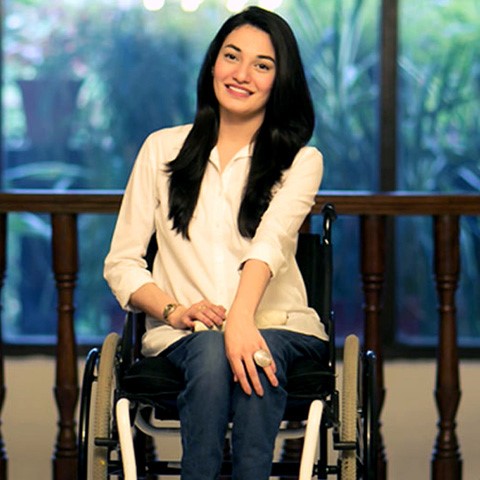 Muniba Mazari (Urdu: منیبہ مزاری‬‎; born 3 March 1987) is a Pakistani artist, model, activist, motivational speaker, singer, and television host. She uses a wheelchair due to injuries sustained in a car accident at the age of 21 which makes her Pakistan's first wheelchair-using model. She is also the National Ambassador for UN Women Pakistan. Muniba Mazari is of Baloch background. In 2007, Muniba met a car accident in which she sustained multiple injuries including spinal cord which left her paraplegic. Along with philanthropic efforts, she has established her brand known as Muniba's Canvas with the slogan Let Your Walls Wear Colors. Her medium is acrylics on canvas. Muniba Mazari, who currently serves as the National Ambassador for UN Women Pakistan and has participated as a motivational speaker at various conferences and forums, her first break being TEDx Islamabad. She was one of the two Pakistanis to be named BBCs 100 most inspirational women in 2015, and works as an occasional anchor at PTV, being their first wheelchair-using anchor. Additionally, Muniba is the first wheelchair-using model for the Toni&Guy in Pakistan, featured in Forbes 30 under 30 in 2016, and head of CSR for Chughtai Labs. Muniba has given motivational talks on various platforms like TEDx, Entrepreneurs' Organization (EO), Young presidents' Organization (YPO), Youth Entrepreneur Organization (YEO), Global Leadership Conference (GLC) 2016, VCon Malaysia 2017, Vcon Dubai 2017 , Leadership Summit Pakistan, etc. She is Pakistan's first Goodwill Ambassador for UN Women. Muniba is one of the Forbes 30 under 30 for 2016 in Media and Marketing Category and is also the anchor person of Pakistan's National Television.